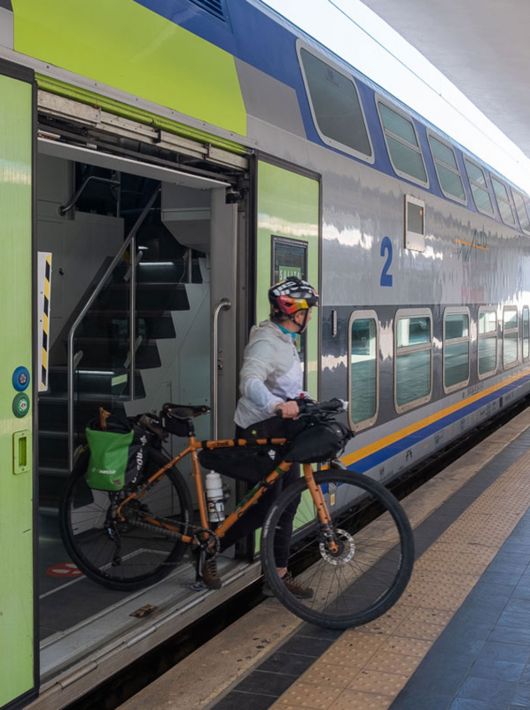 BY TRAIN BY CAR BY PLANE BY COACH

Calabrian park’s cycle network can be travelled in both directions, starting from Laino Borgo or Reggio Calabria.
By train: if you want to get here by train, we inform you that since October 2020 passengers have been able to travel on the Rome-Reggio Calabria Intercity trains with an assembled bike on board with them. These trains travel along the Tyrrhenian coast and stop at the main stations of the region, which are 40 km from the cycle network, on average. From Scalea train station it is possible to use the TNC Trasporti Nord Calabria bus to reach Mormanno, the first stop on the Laino Borgo - Morano Calabro route, the starting point for the northern cycle route (line 365, departure from Scalea 5:30 - 9:30 - 17:30, departure from Mormanno 5:55 - 14:50, Monday to Saturday; info tel. +39 0981 63450 e-mail: This email address is being protected from spambots. You need JavaScript enabled to view it.). You can also reach the cycle network using the Jonica line of the national railways, the Taranto-Reggio Calabria, since Trenitalia has announced that from the summer of 2021 passengers will be able to travel with a bike on all Intercity trains. From the Sibari station, you can head inland taking the regional trains to Cosenza (travelling on holidays too). The stations of S. Marco-Roggiano and Torano-Tallarico are respectively 7.6 km and 11.4 km from Tarsia and Bisignano.

By car you can reach various towns crossed by the cycle network or arrive very close to them, both one the Tyrrhenian and the Ionian coasts. From the west, take the Salerno-Reggio Calabria (E45), which runs along the Tyrrhenian coast heading inland in the territories of the Pollino National Park and the Serre Regional Park; from the east, take the state road SS106 Taranto-Reggio Calabria (E90), which travels along the Ionian coast and connects all the panoramic roads that cross Calabria from coast to coast.

By bus: one more way to get to the cycle network and take your bike with you is Flixbus, which connects the main Italian cities with the towns crossed by the cycle network, including Mormanno, Firmo, Tarsia, Bisignano, Acri, in the north, and Reggio Calabria, in the south. In particular, for those arriving by plane or train, Flixbus offers daily connections from Naples Capodichino airport and Salerno railway station. 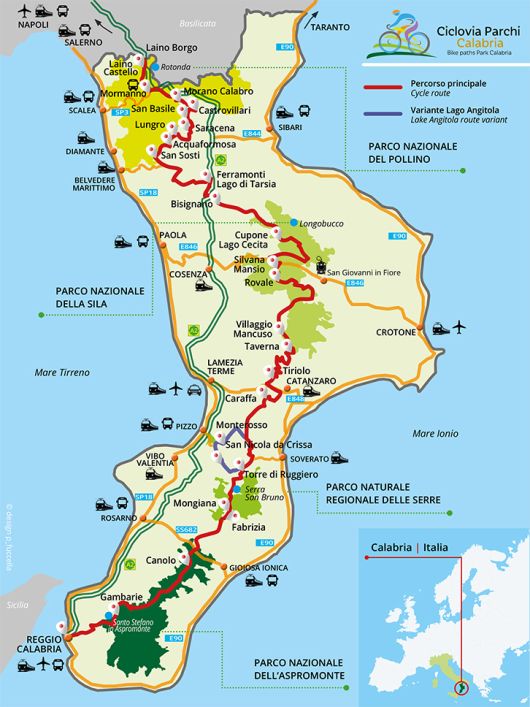 Between the mountains and the sea

The parks cycle network is made up of the all the cycling roads, paths and routes that wind along the main ridge of the Calabrian Apennines. The route, which crosses the Aspromonte, Sila and Pollino National Parks and the Serre Regional Park, crosses or borders some of the main arterial roads of the region: the Mediterranean highway [A2], the European roads E844 (Firmo-Sibari), E846 (Paola-Crotone) and E848 (Lamezia Terme-Catanzaro). The route starts from the Pollino National Park and connects the 4 regional parks mainly through provincial roads, with a traffic rate of less than 50 vehicles/hour. Within the parks, the cycle network is linked to paths or tracks used by hikers to enjoy the natural landscape of the protected areas. It is 545 km long, of which about 323 km are outside the parks. The altitude goes from a minimum of 19 m asl and a maximum of1690 m asl.