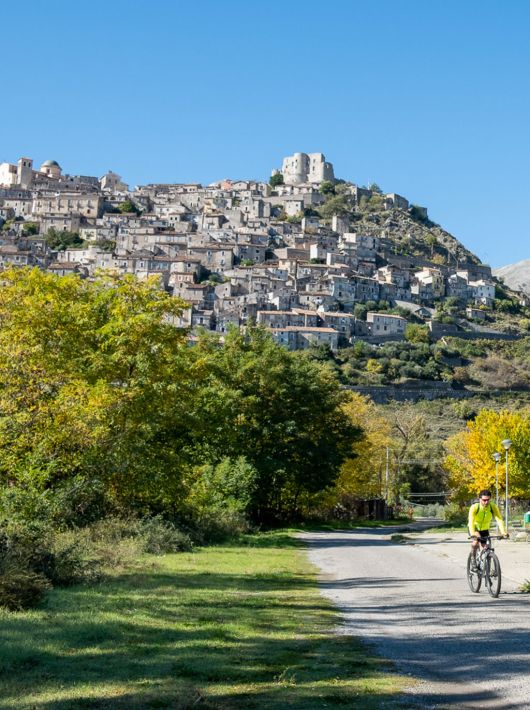 Arbëreshe communities and rituals to celebrate the Virgin

An extraordinary journey through time and history, which will take you across a land that has been inhabited since the Stone Age, as evidenced by the remains of an ancient graffito depicting an ox, located in the “Romito di Papasidero” cave and dating back to over 11,000 years ago. The journey will take you across the Pollino’s villages dating back to the Roman period, such as Morano Calabro - the enchanting village shaped in semicircles that charmed Escher, who painted it several times - and the Lombard towns, such as the ancient village of Laino Castello. The area is also home to some Arbëreshe-speaking communities, which were founded in the 15th century by Albanian refugees and fighters fleeing their home towns and seeking refuge in the villages of Frascineto, Civita, Firmo, Lungro, Acquaformosa, San Costantino e San Paolo Albanese (the last-named are located in the area of the Pollino Park belonging to Basilicata region). They are close communities, which still preserve the Arbëreshe language and traditions, as well as the Orthodox cult. In fact, many of the churches located in the area are Orthodox. One of the most important ones is the Church of San Giovanni Battista in Acquaformosa. Among the places of interest relating to Christianity, it is worth mentioning a series of sanctuaries dedicated to the Virgin and placed against natural backgrounds of rare beauty, which attract the faithful from all over the word: the Madonna del Pollino in San Severino Lucano, Santa Maria delle Armi in Cerchiara di Calabria, which keeps the miraculous image of the Black virgin, and the Madonna del Pettoruto in San Sosti, a sanctuary dominated by the remains of the ancient Byzantine city fortress Kastron of Casalini. In Ferramonti di Tarsia there is the largest fascist internment camp in Italy, a symbol of a tragic historical period of the 20th century, which is revived in the Museum of Holocaust Memorial.
HISTORY AND FAITH 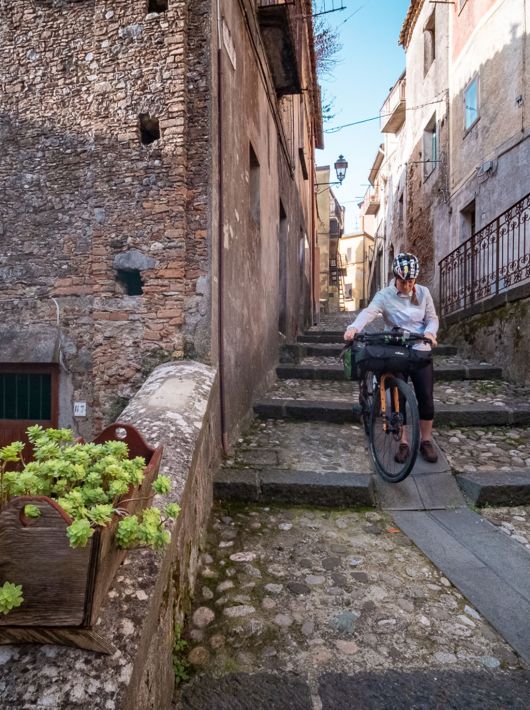 Along the paths of Gioacchino da Fiore

The Sila Park is located further south. Here, among very ancient human settlements there are the remains of a Neolithic village dating back to 3500 BC, which emerged on the southern shore of Lake Cecita. In the past the park represented a wood reserve for the ancient Greek cities of the Ionian Coast. In the Middle Ages it became a refuge for groups of Basilian monks, who built monasteries that are still accessible today, such as the Monastery of Santa Maria del Patire near Rossano. Spirituality is palpable in the worship places founded by hermit monks, blessed and saints, including the extraordinary Abbazia Florense di San Giovanni in Fiore, built in the 13th century, close to the abbey wanted by scholar Abate Gioacchino da Fiore, which was destroyed by a fire in 1214. It is also worth mentioning the Santuario di Sant’Umile, a sanctuary established by Blessed Pietro Cathin, sent by Saint Francis of Assisi to set up the religious order of the Franciscans in Bisignano, an ancient town and bishop see, historically related to the noble family of Sanseverino. The Greek Sila, on the other hand, testifies to the widespread presence of Arbëreshe communities, starting from the town of San Demetrio Corone. At the foot of the Sila Piccola, further south, lies the town of Taverna, where the famous painter Mattia Preti was born in 1613. The Civic Museum houses precious works of the artist. If you continue along the path towards the Serre you arrive at Tiriolo, a town that has been inhabited since the Neolithic period. From its high peaks, you can see the two seas that border the region, just like in the nearby Grifalco, a village of medieval origin located in the narrowest point of the Catanzaro isthmus. The ancient road of Magna Grecia that connected the Ionian and the Tyrrhenian Seas passed through this point. 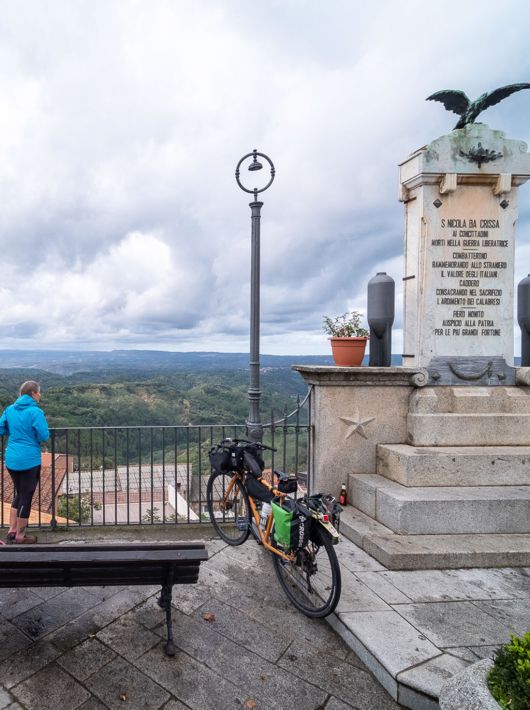 Across woodlands, charterhouses and mines

The journey continues towards the south up to the Park of Serre and crosses Monterosso, a village of medieval origin with an ancient graphite mine, active until the second half of the 20th century. Today, this mineral is reproposed in the traditional natural dyeing of fabrics. The town is home to the Multimedia Museum of the Calabrian Serre, which tells the story of this land and its human settlements. The path then takes you to San Nicola da Crissa, known as "the balcony of Calabria”, from where you can enjoy views over Mount Etna. The second stop is Torre di Ruggiero, a Norman-founded town hosting the Sanctuary of the Madonna delle Grazie, known as the “Lourdes of the Serre”. From here the route gently undulates into one of the most charming stretches of the cycle network: Serra di San Bruno. Here, in the thick of the woods lies the first Carthusian monastery in Italy, built between 1090 and 1101 by Bruno of Cologne, the founder of the Order and the Saint buried in the nearby Sanctuary of Santa Maria del Bosco. The Charterhouse is a place of profound spirituality, where monks still live today and that visitors can get to know thanks to a very engaging narrative journey. A majestic monastery inspired by the Convent of the Dominican fathers of nearby Soriano Calabro, one of the most important in Europe, destroyed by an earthquake in 1783 and whose stunning façade can still be admired, in a unique monumental context. Further south, the cycle network leads to Mongiana, which is home to Ferdinandea, the imposing centre for cast iron production wanted by the Bourbons and dedicated to Ferdinand II. You can visit the entire urban complex, which is further enhanced by the weapons factory museum, not far from one of the symbolic monuments of Calabria: the Cathedral of Stilo.
HISTORY AND FAITH 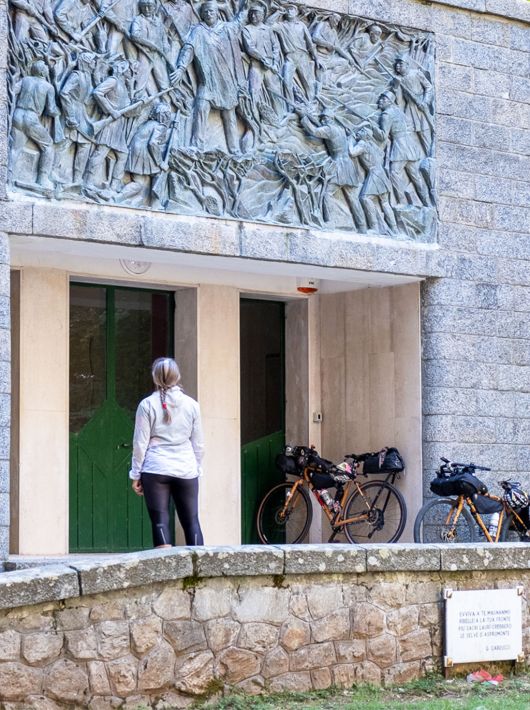 Where the wind of history blows

Once at the heart of the Aspromonte, the cycle network crosses Fabrizia, the city founded by the Prince of Roccella, Fabrizio Carafa, in the 16th century, which has always been a place of exchange of mountain and sea products. From Passo del Mercante, a pass that in the Magna Graecia era connected the two Calabrian coasts, and the Piani di Zervò, where, among dense beech and conifer forests lies the former Vittorio Emanuele II sanatorium, the route takes you to Canolo, a magnificent mountain village nestled between two canyons in the "Southern Dolomites". The journey continues in the direction of Gambarie, crossing the paths of the brigands that lead to Montalto, the highest peak of the Aspromonte from which you can enjoy breathtaking views over eastern Sicily, the Sila, the Ionian and the Tyrrhenian Seas. Looking towards the sea you can also spot the centuries-old pine forest of Sant'Eufemia di Aspromonte, where Giuseppe Garibaldi was wounded, near a giant tree, in August 1862. A mausoleum was built here in memory of the Italian general. In the direction of the Ionian Sea, instead, there is the Sanctuary of the Madonna di Polsi (862 m), known as "A Madonna dâ Muntagna” (the Virgin of the mountains). Here, one of the most heartfelt festivals by the local populations is celebrated, in some unparalleled natural scenery that enchanted the writer and illustrator Edward Lear, who wrote, on his trip to Calabria in 1847: "Without doubt, one of the most remarkable scenes I have ever seen.” The last stretch of the cycle network goes from Mount Basilcò, listed among the most beautiful peaks of the Aspromonte, directly to the sea and the wonderful city of Reggio Calabria. Known as the "place of the wind", this city is one of the oldest in Europe and among the first Greek colonies in Italy, a land that was already inhabited by the ancient populations of Ausones and Oenotrians. Its thousand-year history is embodied by the amazing Riace bronzes that are on display at the National Archaeological Museum, together with many other interesting finds.
spiritual historical adventurous

Thanks to a wide range of fascinating routes, Calabria is the ideal location for walking and trekking lovers. From north to south, from Rocca Imperiale to Reggio Calabria, the region is criss-crossed by the Basilian Way, a 73-stage route that winds its way along more than a thousand kilometres of paths in the footsteps of the Italo-Greek monks inspired by the life of St Basil. The route of San Francesco di Paola, which starts in San Marco Argentano and ends in Paola, on the Tyrrhenian Sea, gently undulates from the Sila park to the coast. Further inland, the route of Gioacchino da Fiore takes you from the Abbey of Corazzo to San Giovanni in Fiore. The so-called “route of the Englishman” (sentiero dell’inglese) winds up mount Aspromonte, in the footsteps of writer and designer Edward Lear. Moreover, between mount Aspromonte and the Serre you can take the path of the brigands (sentiero dei briganti), from Gambarie to Stilo. Finally, 31 stages of the Italian path (sentiero Italia), of the Italian alpine club, offer the opportunity to travel the entire Apennines ridge, from mount Reggio to Morano Calabro